[Students’ Text] [TRANS-SCALAR—AUTONOMY] Being the primary source of subsistence for the local community, as well the economic lifeblood of the country (through the generation of hydropower), the Madi river can be regarded as the backbone of the Madi region. Nepal experiences seasonal monsoon floods, which result in property and infrastructural damage, in turn affecting the exported yields of the local produce. Incidentally, the state of development of these settlements is substandard, throttled by the misappropriation of national funds due to corruption within the authoritative powers of the state. In addition, this effects frequent droughts of electrical power, a crises which leads to unaffordable inflation of electricity. Pollution is generated as a by-product of household activity, which combine with natural debris to flow downstream, eventually converging into the Ganges River.

Riding on the technology development to harness sustainable hydro-energy in Madi river, our scheme aims to create an autonomous community in Nepal. With the help of electricity generated from the hydro-power technology, we foresee the use of sustainable power as capital and source of empowerment in the community. The urbanism proposed establishes a framework for development by setting up the requisites – residential nodes, infrastructure networks and the systems of production. The strategy utilises the abundance of hydropower of the river and its tributaries as a framework for urban development. The vortex microdam was identified as a non-intrusive strategy of harnessing hydropower, a means of subsistence as well as to generate a surplus to export for profit, generating a means of passive income for these settlements.

[POTENTIAL FOR HYDROPOWER] The theoretical potential of hydropower in Nepal is immense, and yet it is still in its infancy stages. The total installed power generation capacity of Nepal is 706 MW, representing only about 1.5% of its theoretical hydropower potential. Therefore, riding on its environmental and economic feasibility, there is an opportunity in exploring the architectural and urban potential of hydroelectric dams in Nepal. The mountainous terrain and abundant rainfall in the Madi River region are ideal conditions for the introduction of hydro-electric dams.

Upon further indexical studies on the conditions of the site, we clustered the built-up areas using the proximity of each house in relation to the next. This was then compared with a study on the incident solar radiation of these clusters, of which the following was identified: The locals can be split into two clans – the mountain-dwellers and the plain-dwellers.The mountain-dwellers are scattered along the highlands and mountainous plains, relying on the surface-runoff from groundwater sources and seasonal monsoons for water. The plain-dweller settlements are distributed along the main river, also relying on agriculture and the main river for subsistence. Incidentally, arable land is scarce, the available natural resources are finite and the access to them is limited. Over generations of population growth and territorial expansion, simple economics dictate that there will come an instance where the locals will run out of usable land. What then?  Instead of targeting a specific community from the two groups, the proposal will be to strategise a framework that will address both communities – to coexist rather than to isolate. The microdam was selected as a method of floodwater alleviation and a source of electrical power as building construction as compared to dams as the maintenance of large dams require a significantly larger capital fund. Additionally, the larger dams cause a displacement of communities upstream and downstream and reduces the fertility of the plain regions. Further research culminated in the specification of the vortex microdam, being the potential to be implemented in the site. The GWVPP (Gravitational Water Vortex Power Plant) offers a sustainable production of hydropower with three noticeable benefits: It enables a water cleansing effect through the growth of aquatic plants that are self-regenerating biological filters. Also, it allows the migration of fish through the GWVPP in both directions and without much exertion. Lastly, it provides an aeration of water. Our intervention works in tandem with time over a series of phases. Instead of developing the local community at the expense of the natural environment, the proposal seeks to harness the hydropower that the site has an abundance of, to provide the electricity for infrastructural development and in that process, filtering and cleansing the river as it passes through the vortex dams. The initial phase will be to utilise the indexical studies to identify potential sites within the plains for microdam-power generation. These power nodes will then be the basis of which the infrastructural grid will be placed upon. The electrical capital that these small interventions contribute will then be the cornerstone to sustain productive economies, which will then provide the investment for the subsequent development of infrastructure and the economy – an autonomous and sustainable economy generated by the landscape. The secondary phase will be to develop the infrastructure for vertical expansion – upwards from the river. By converging at the midpoint alongside the slope of the mountainous terrain, this continuous scaffolding provides a network for the transportation of resources along the challenging terrain and installs the structural framework for the construction of buildings and productive infrastructure (the harvesting solar and wind energy). Rather than an erection of a monolithic linear megastructure, the proposal culminates in the coexistence between the local communities and the natural landscape. The intervention preserves the existing association between the locals and the landscape in a co-existence of mutual benefit, whereby the orchestration of the strategies for the unique site conditions impose an ecological system to craft the scenario of a possible meta-utopia in the long term. 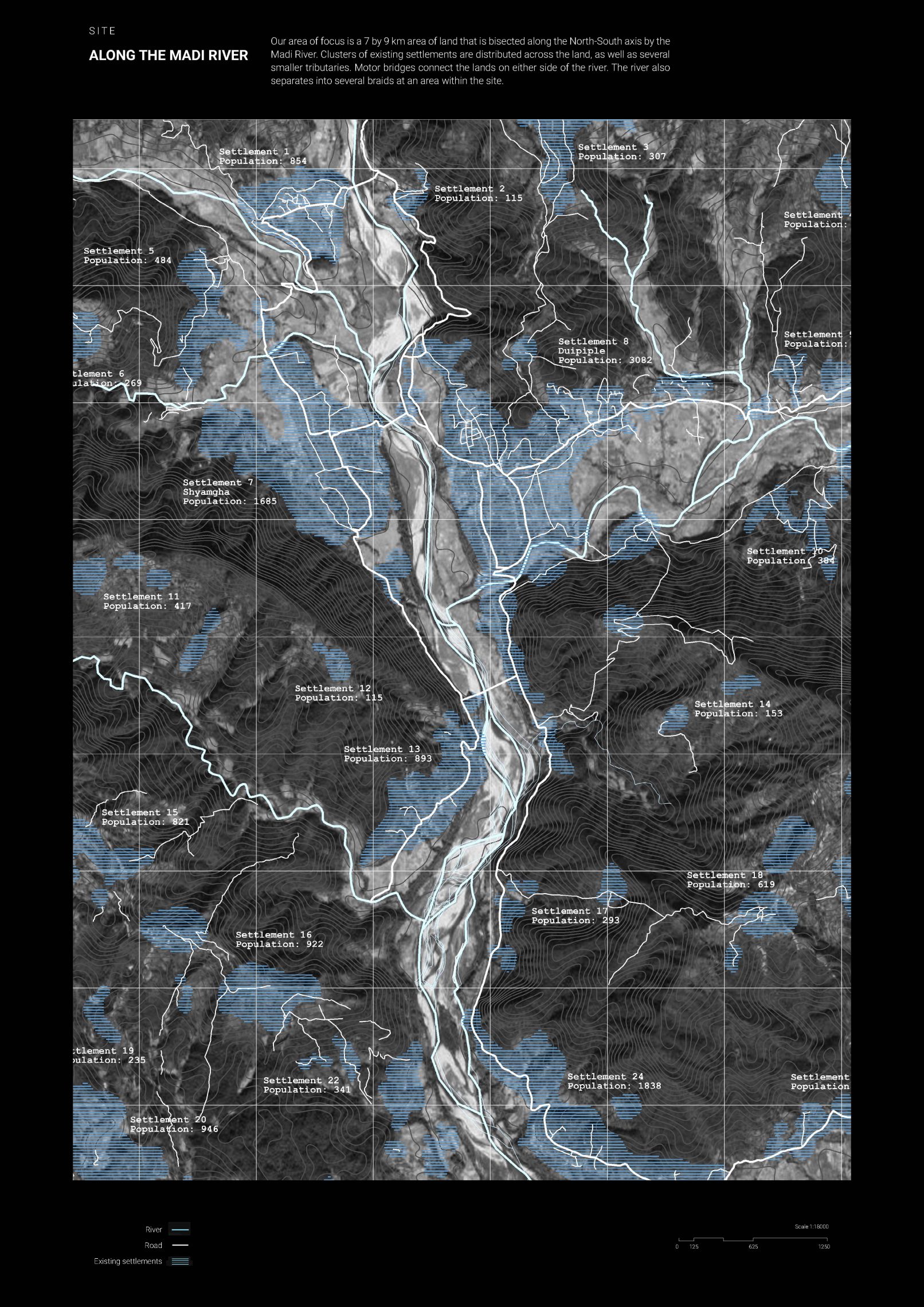 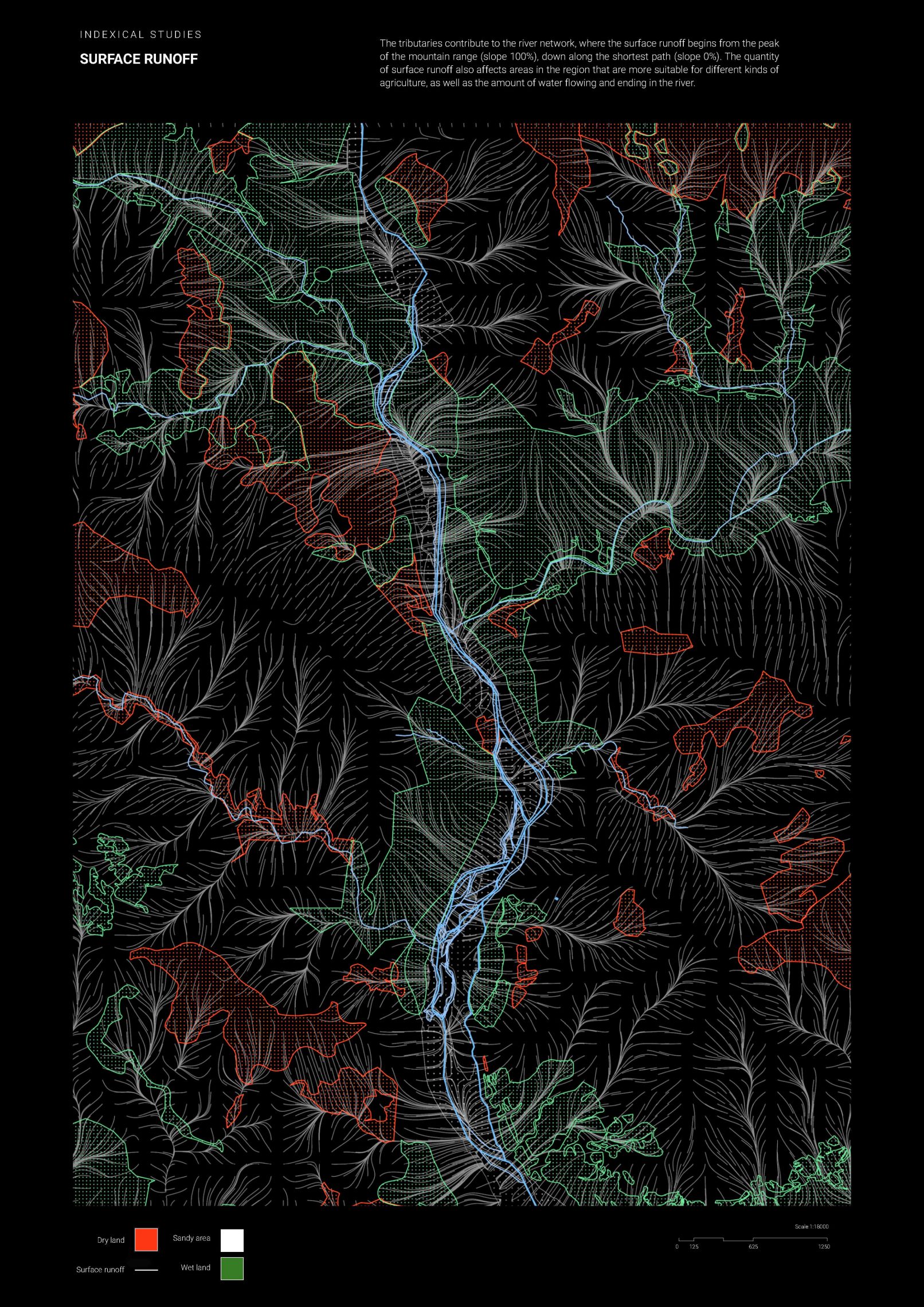 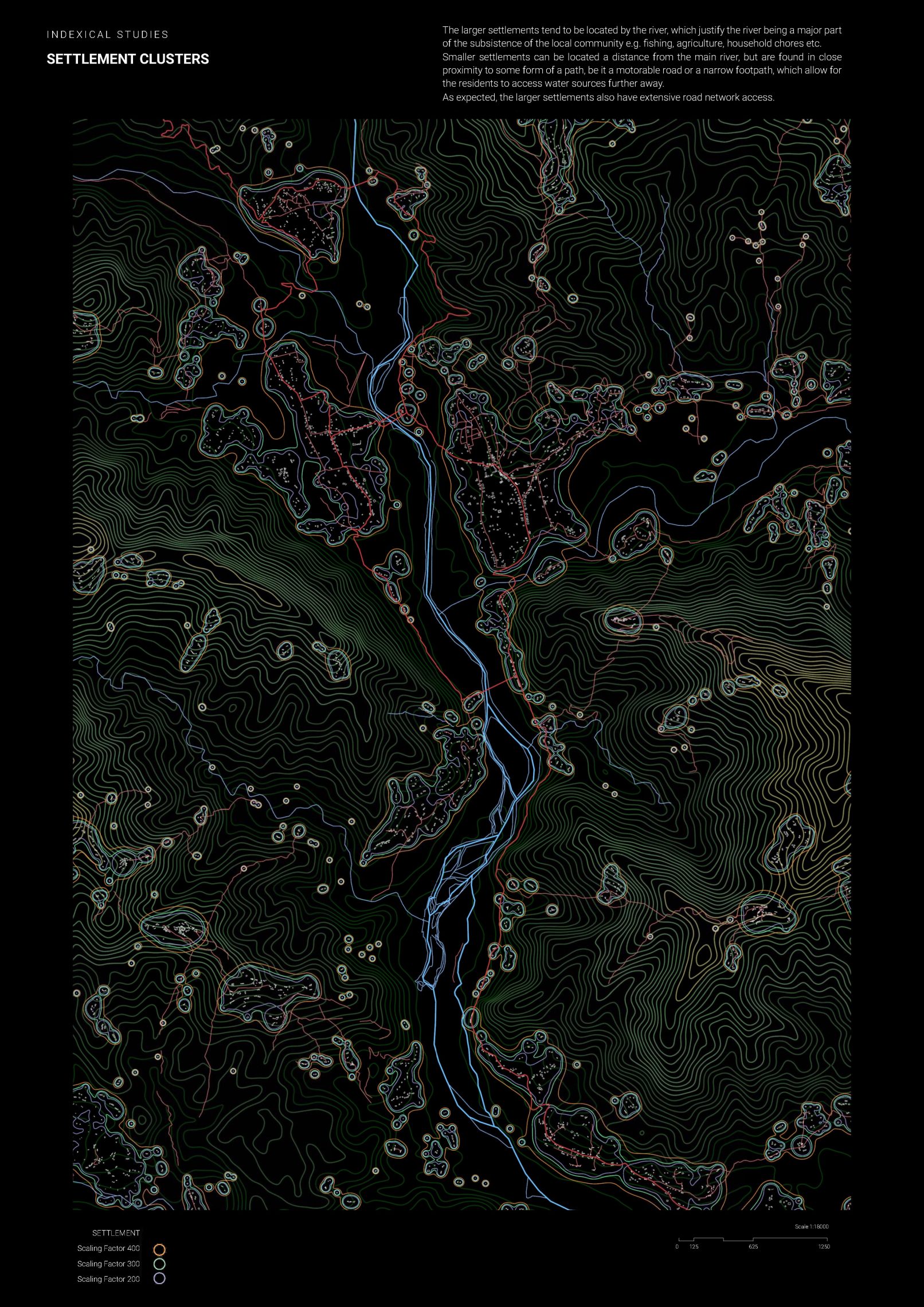 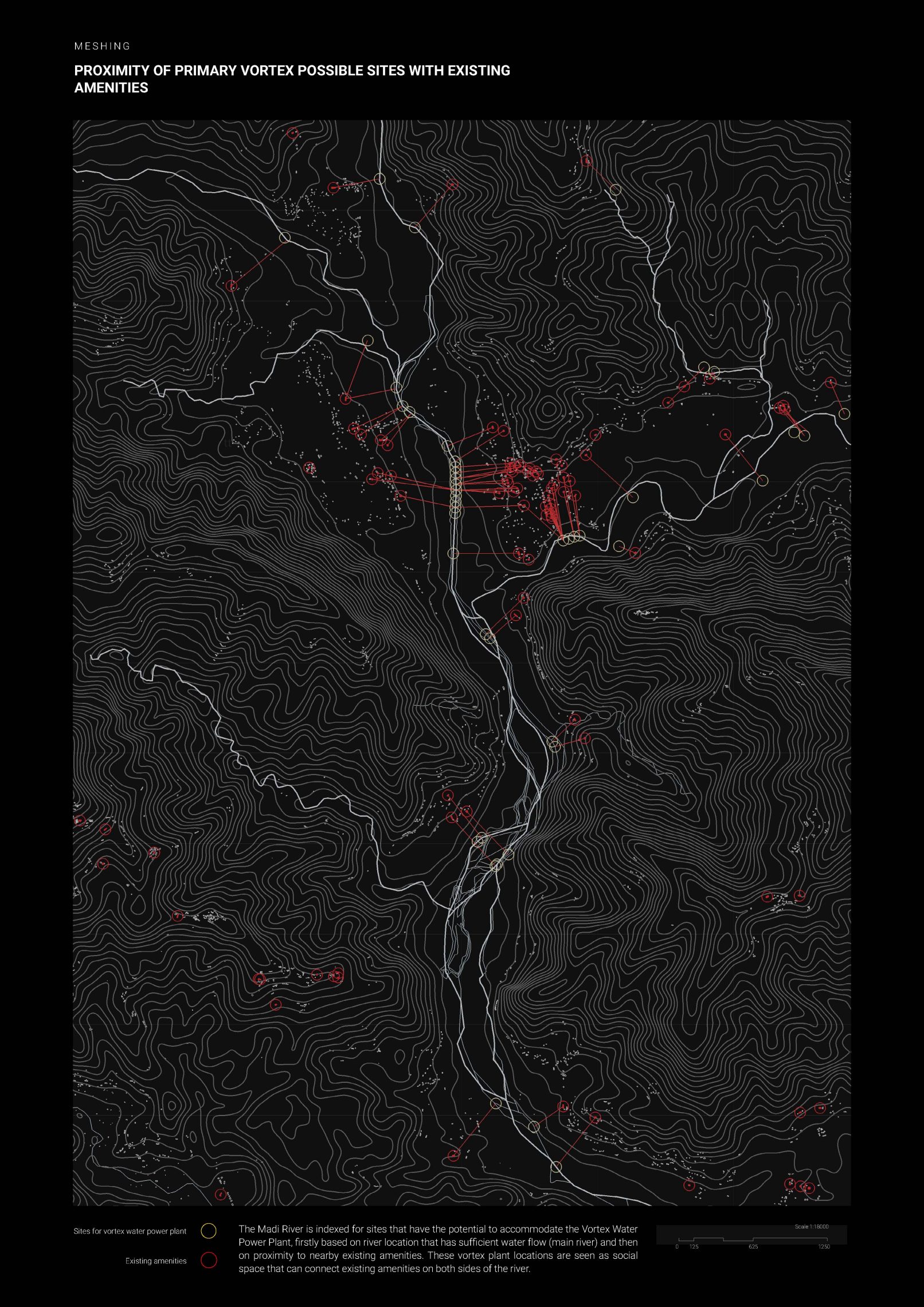 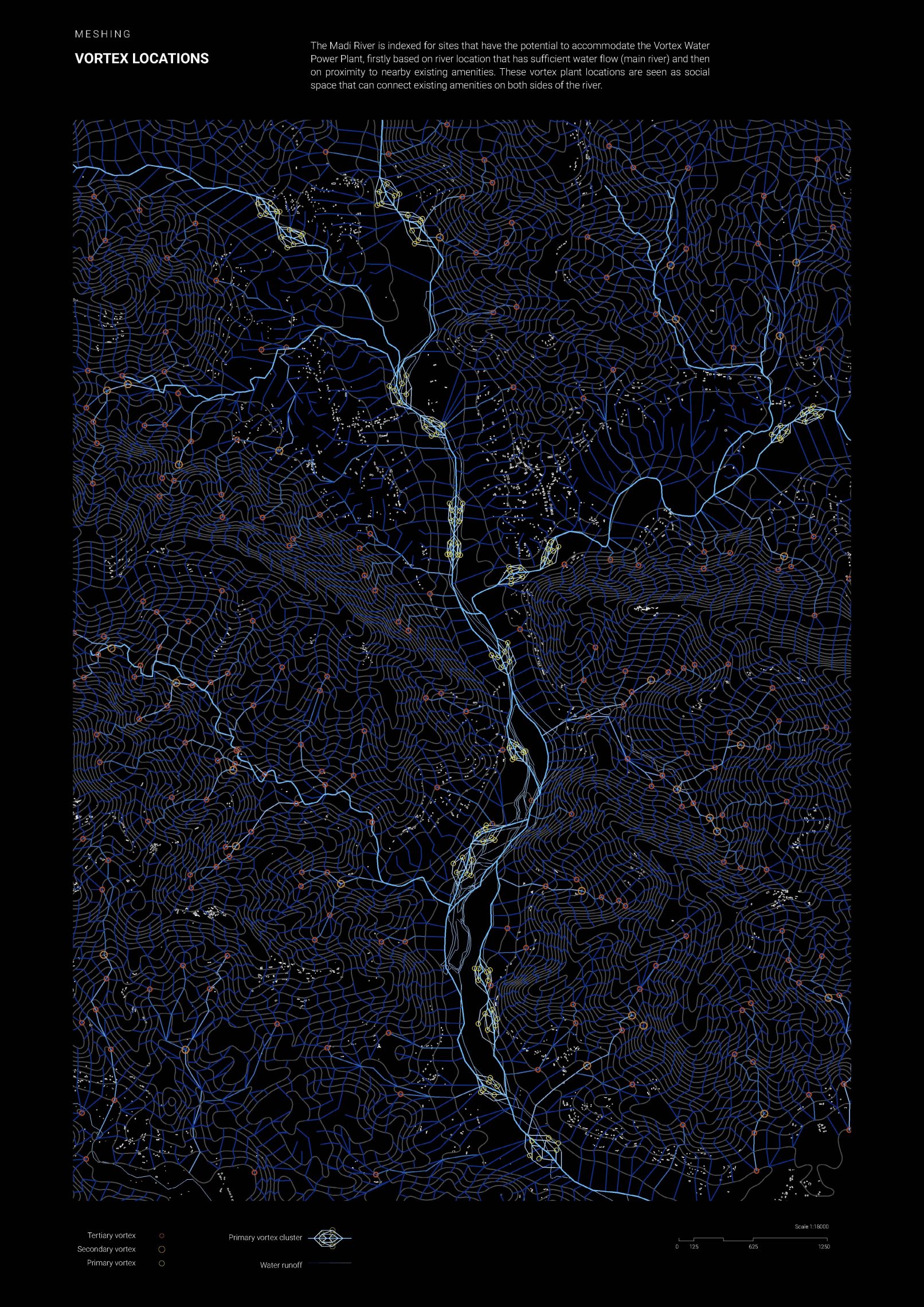 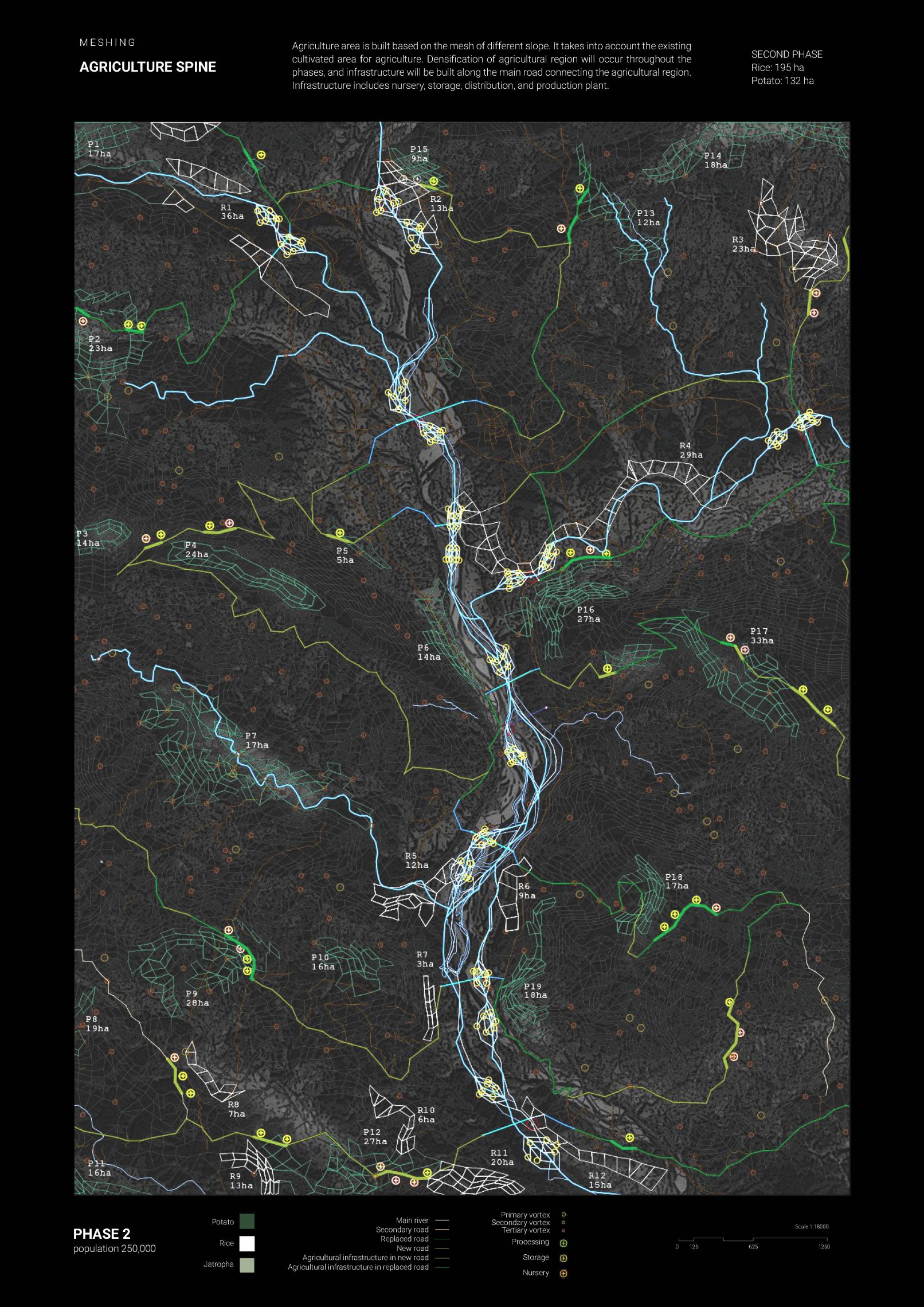 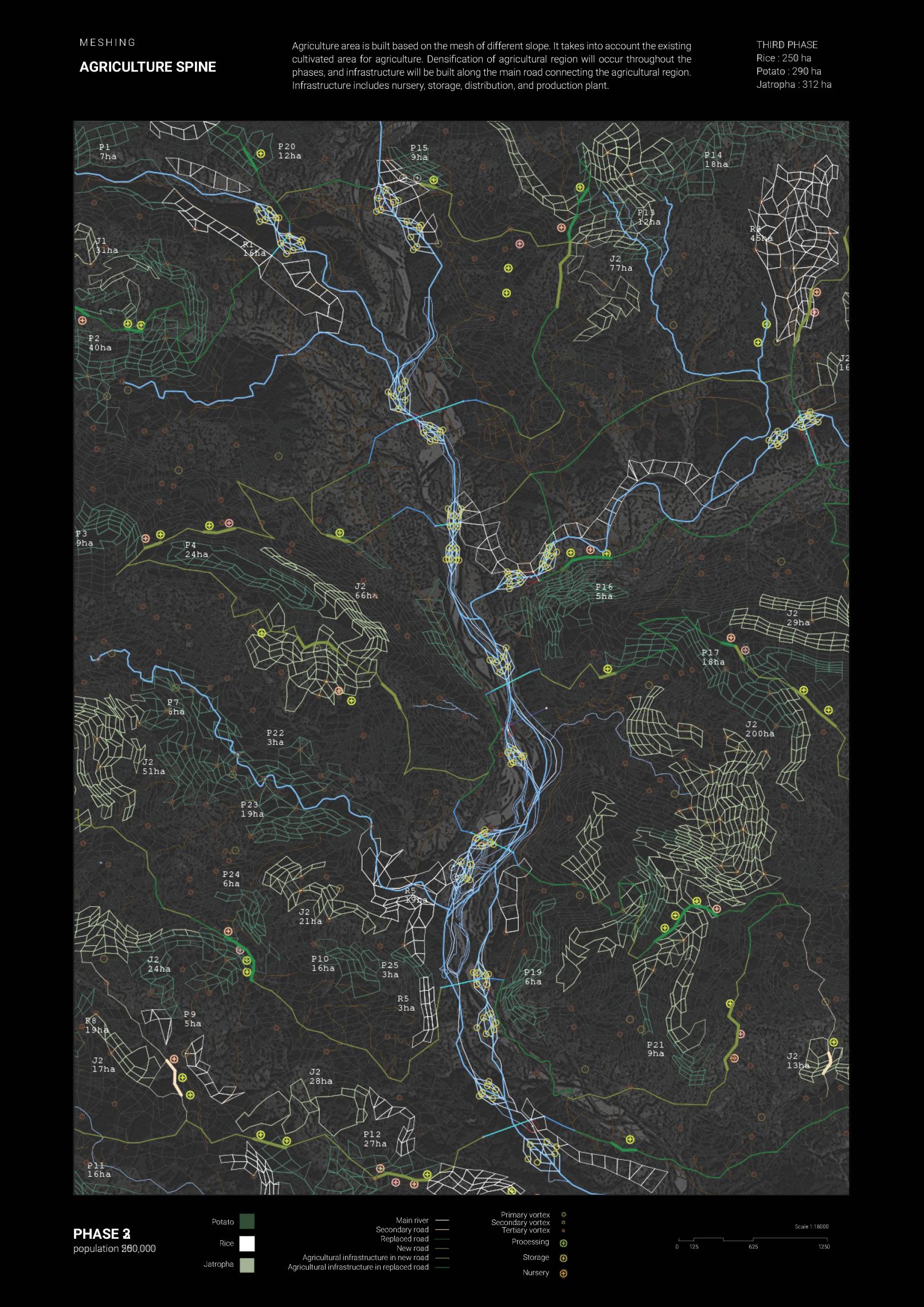 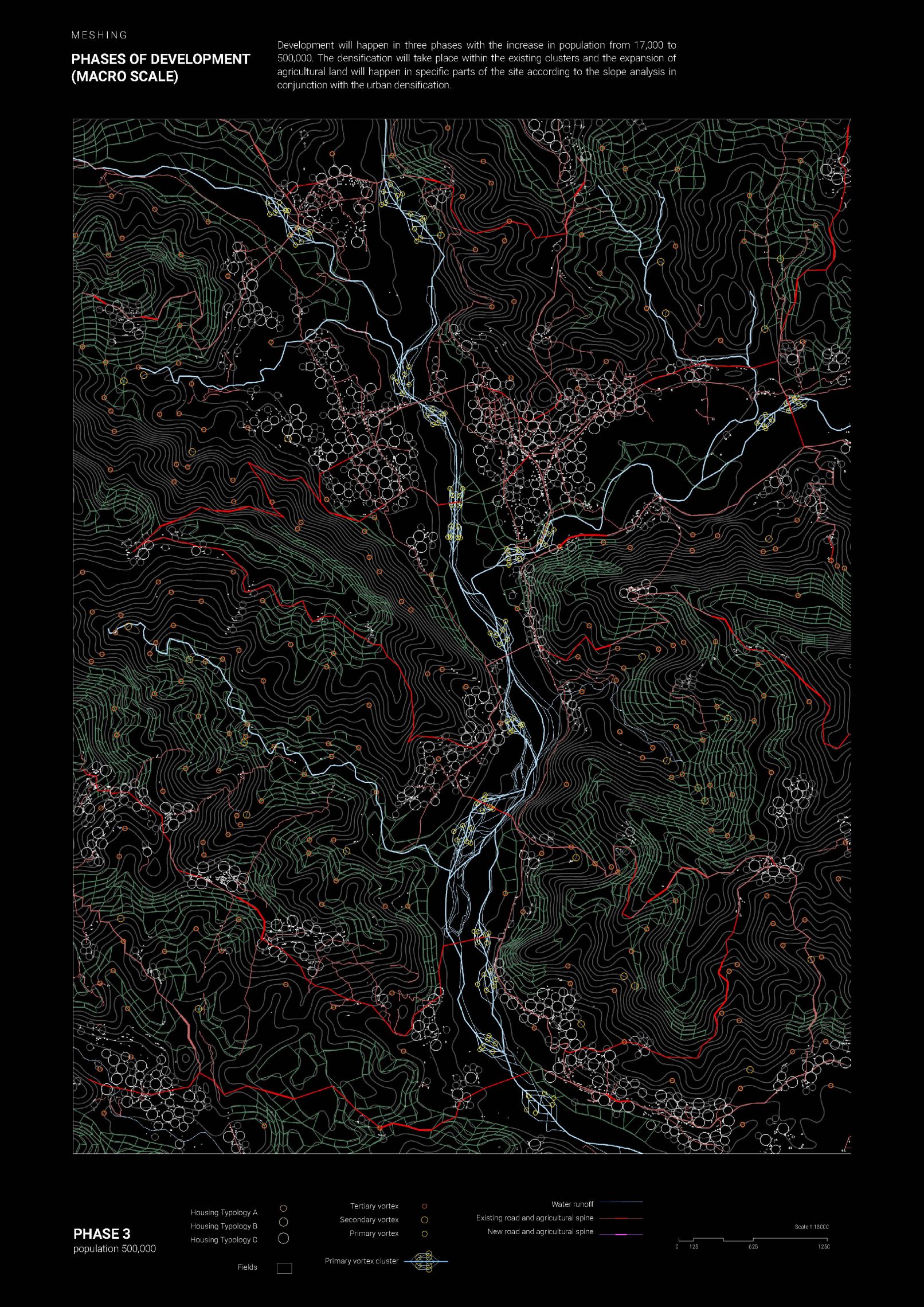 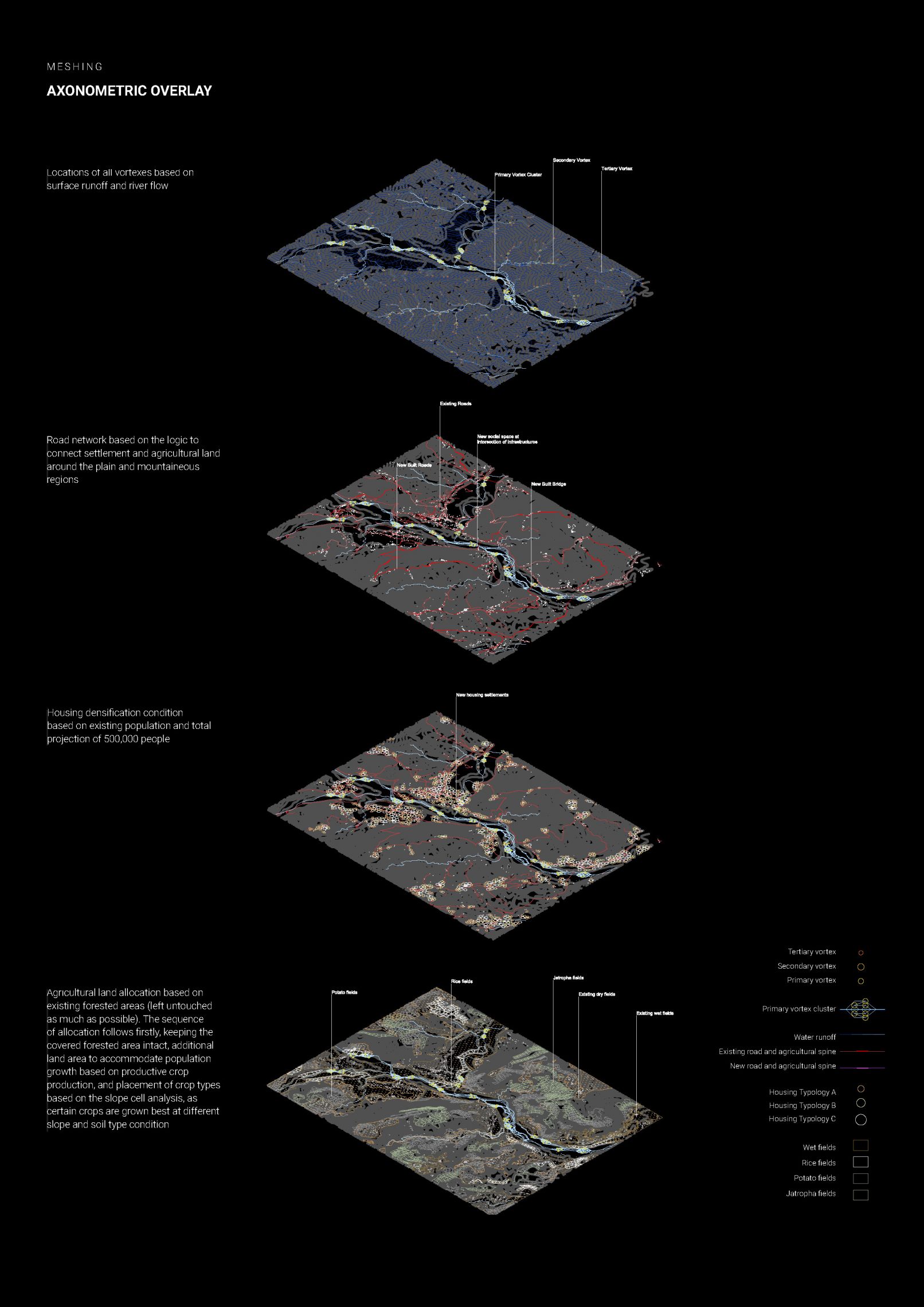 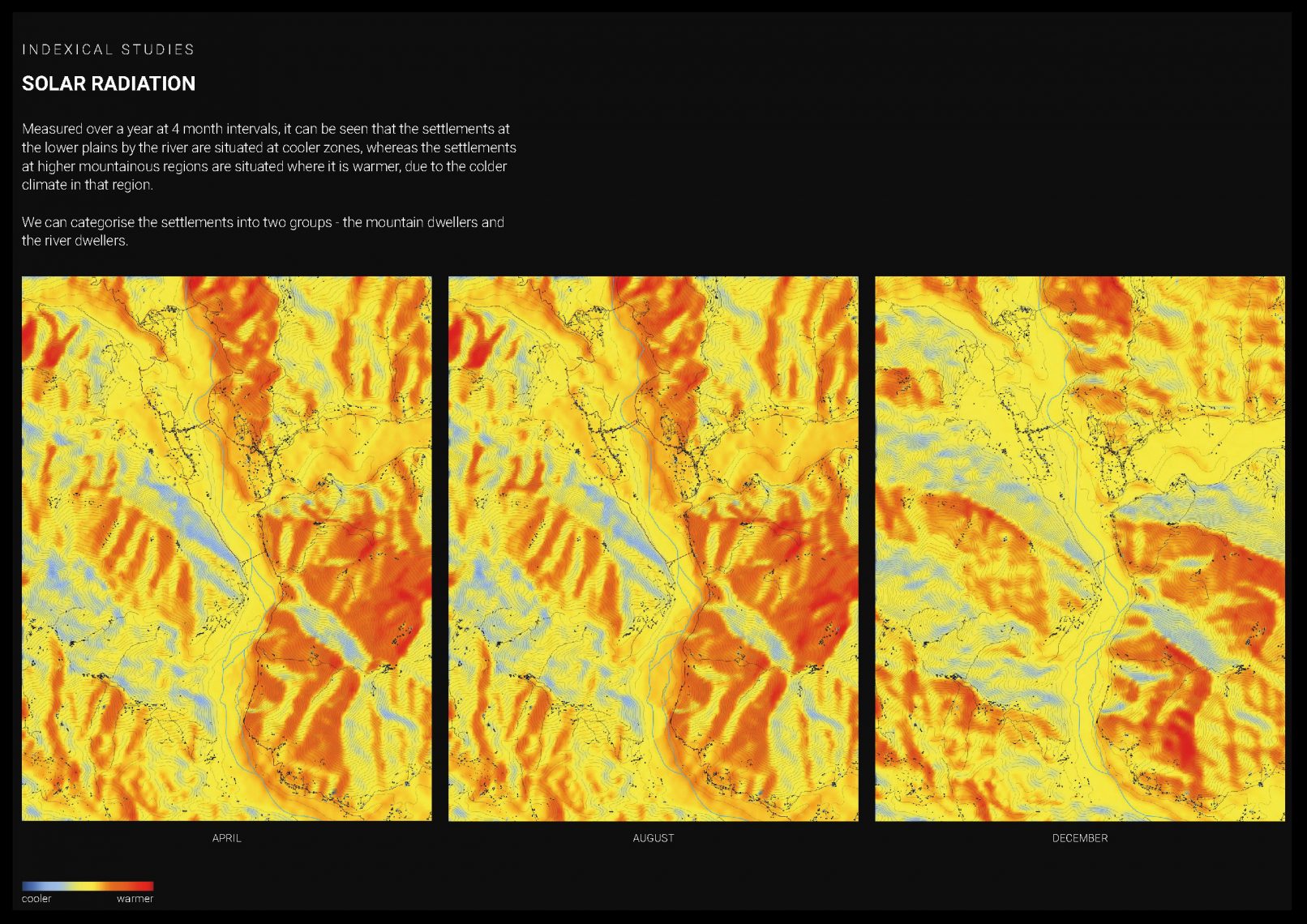 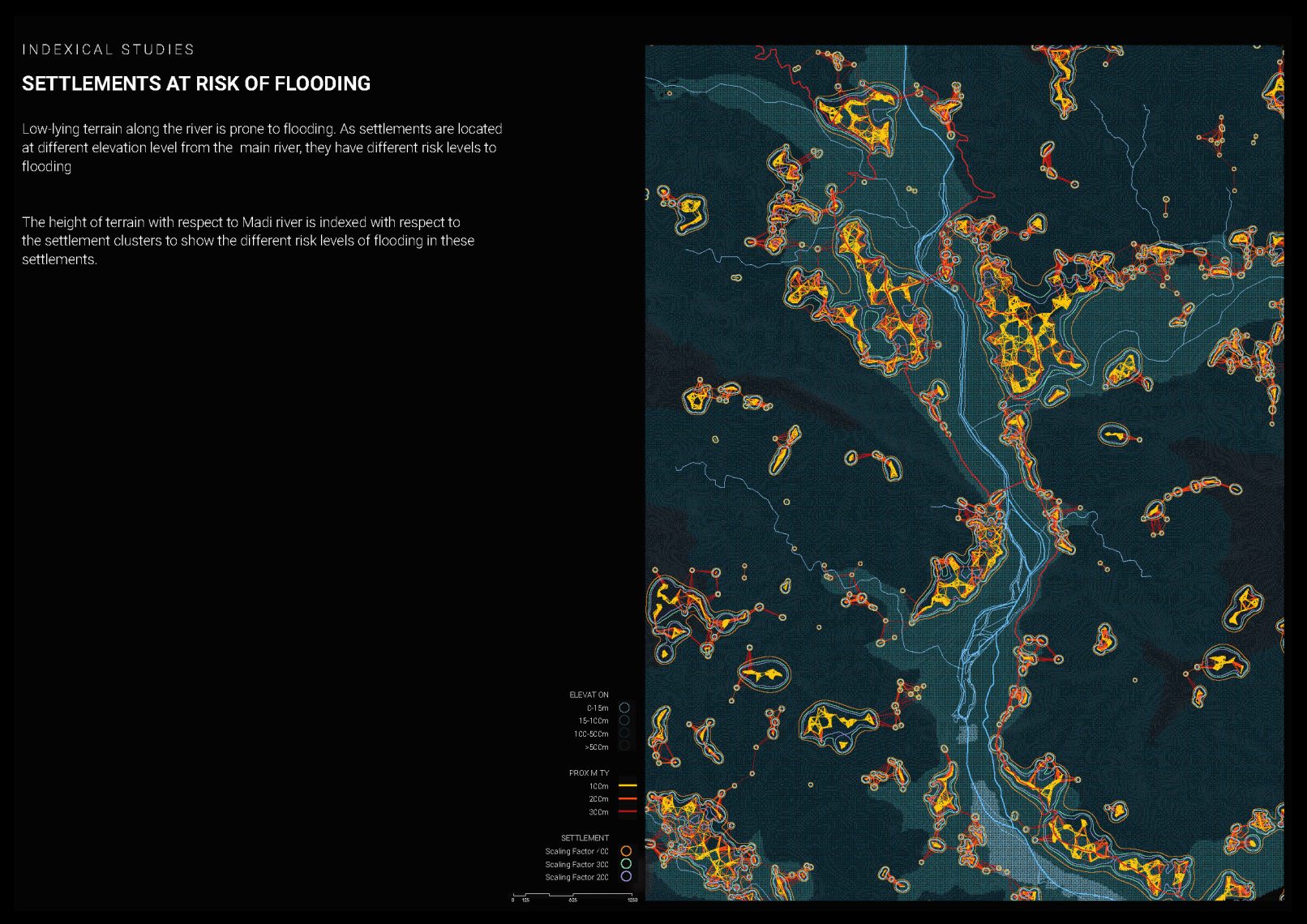 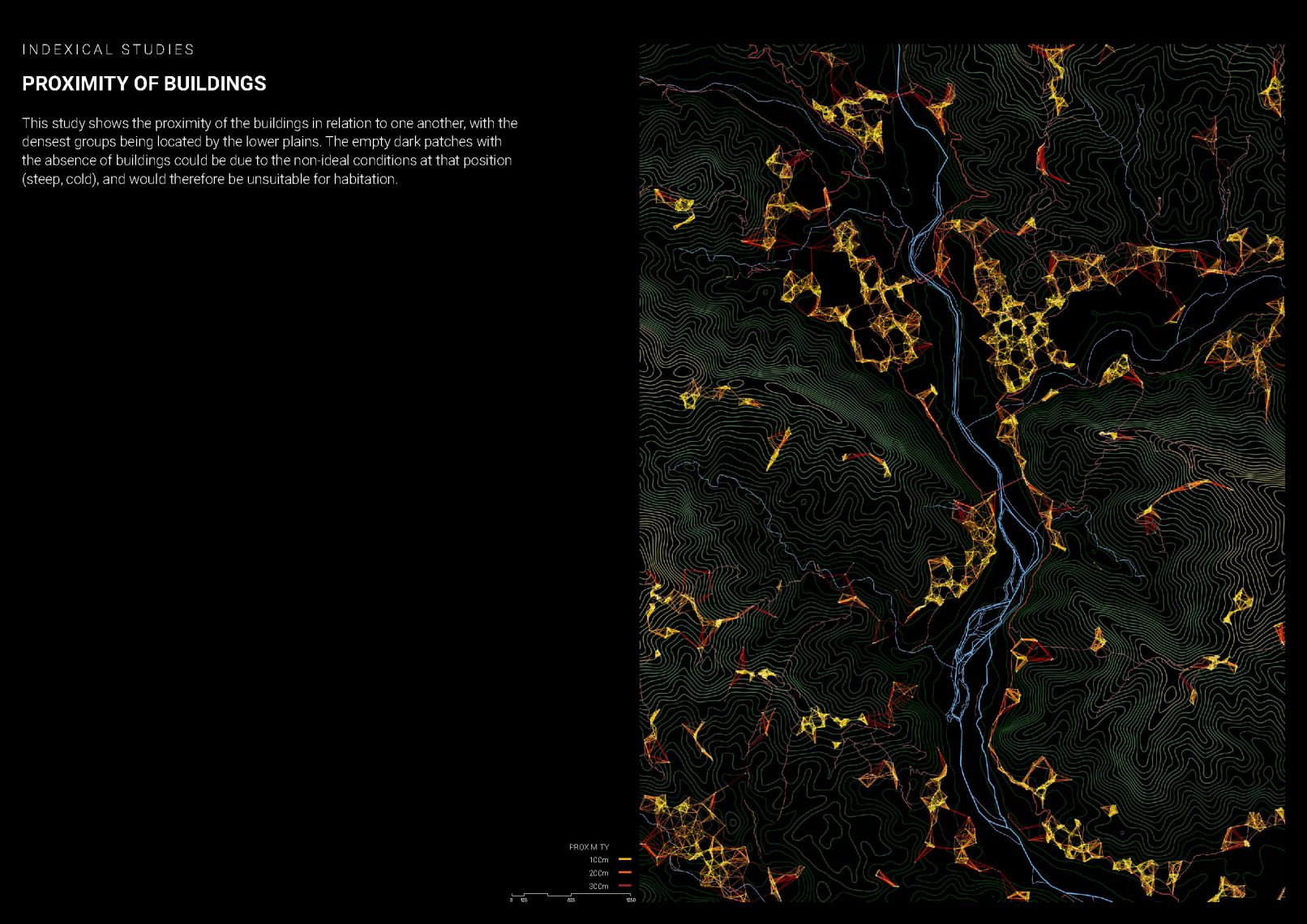 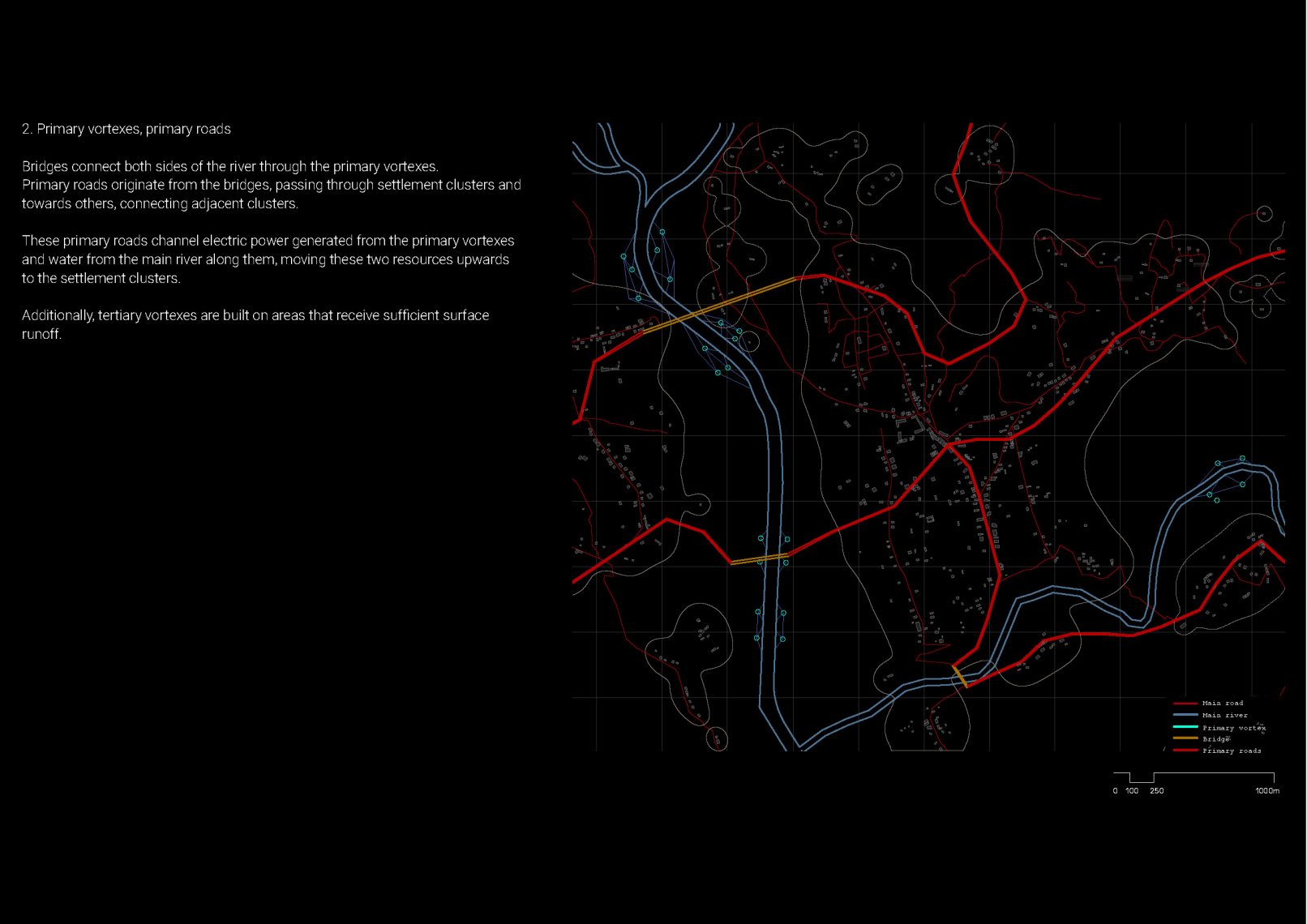 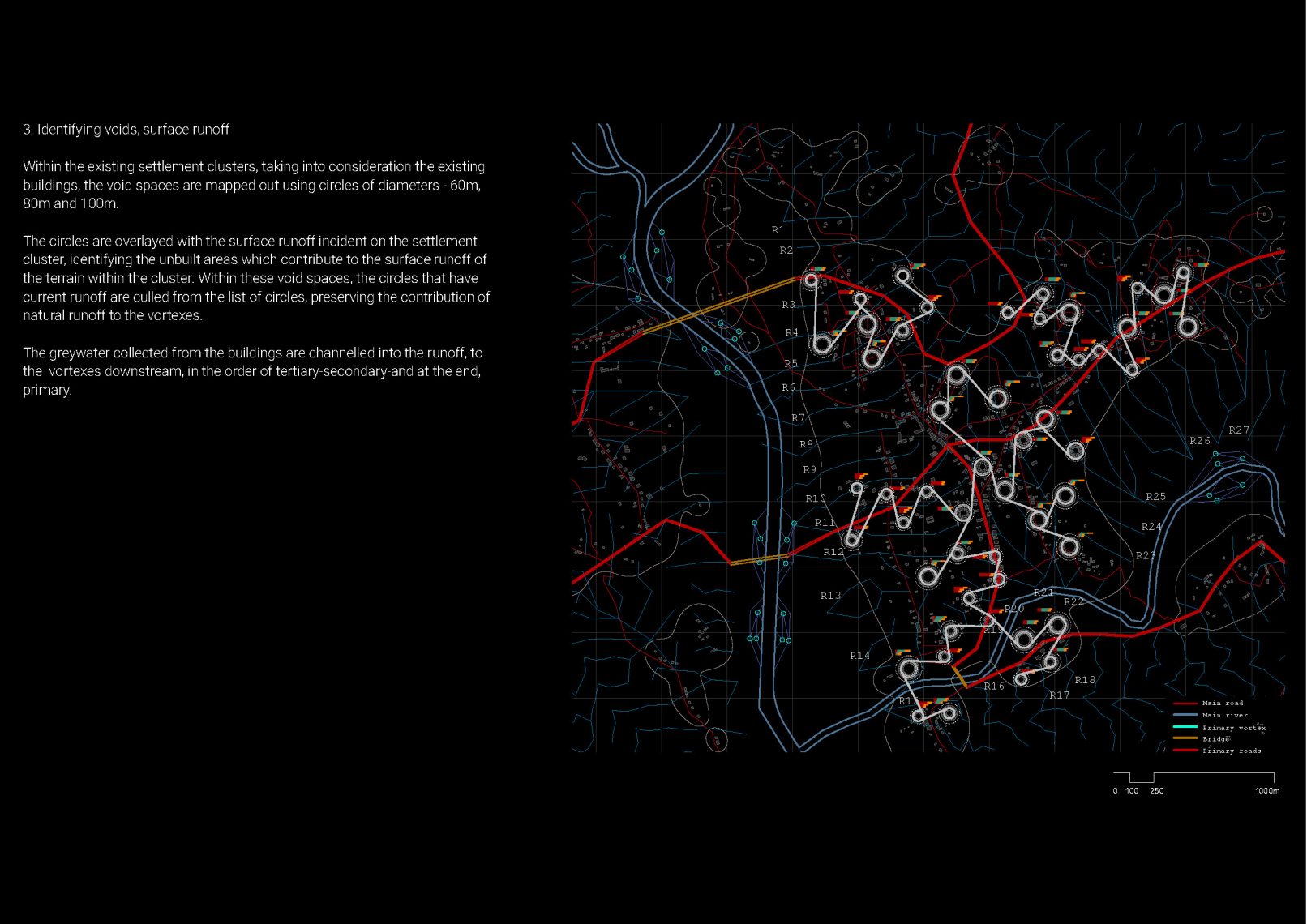 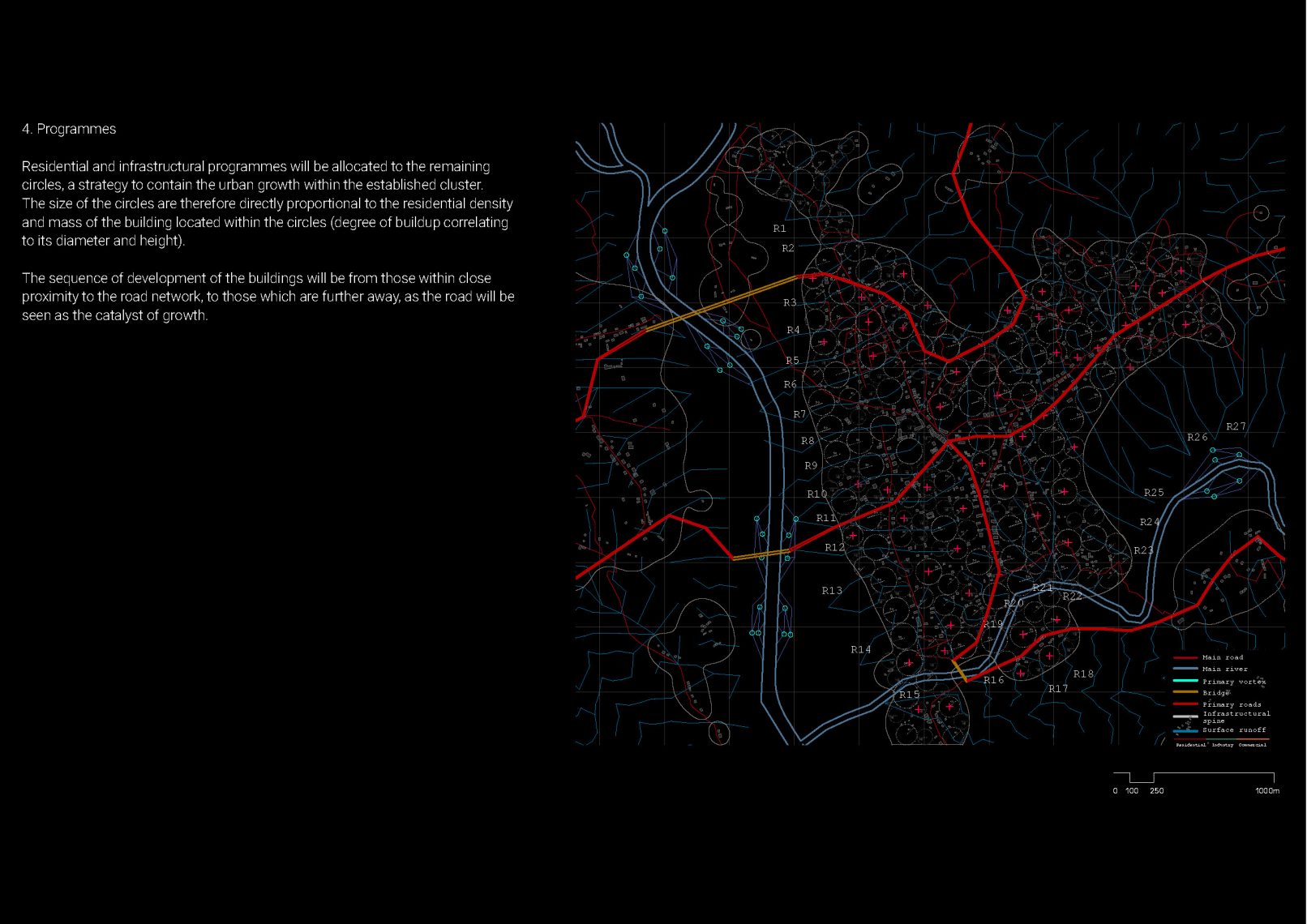 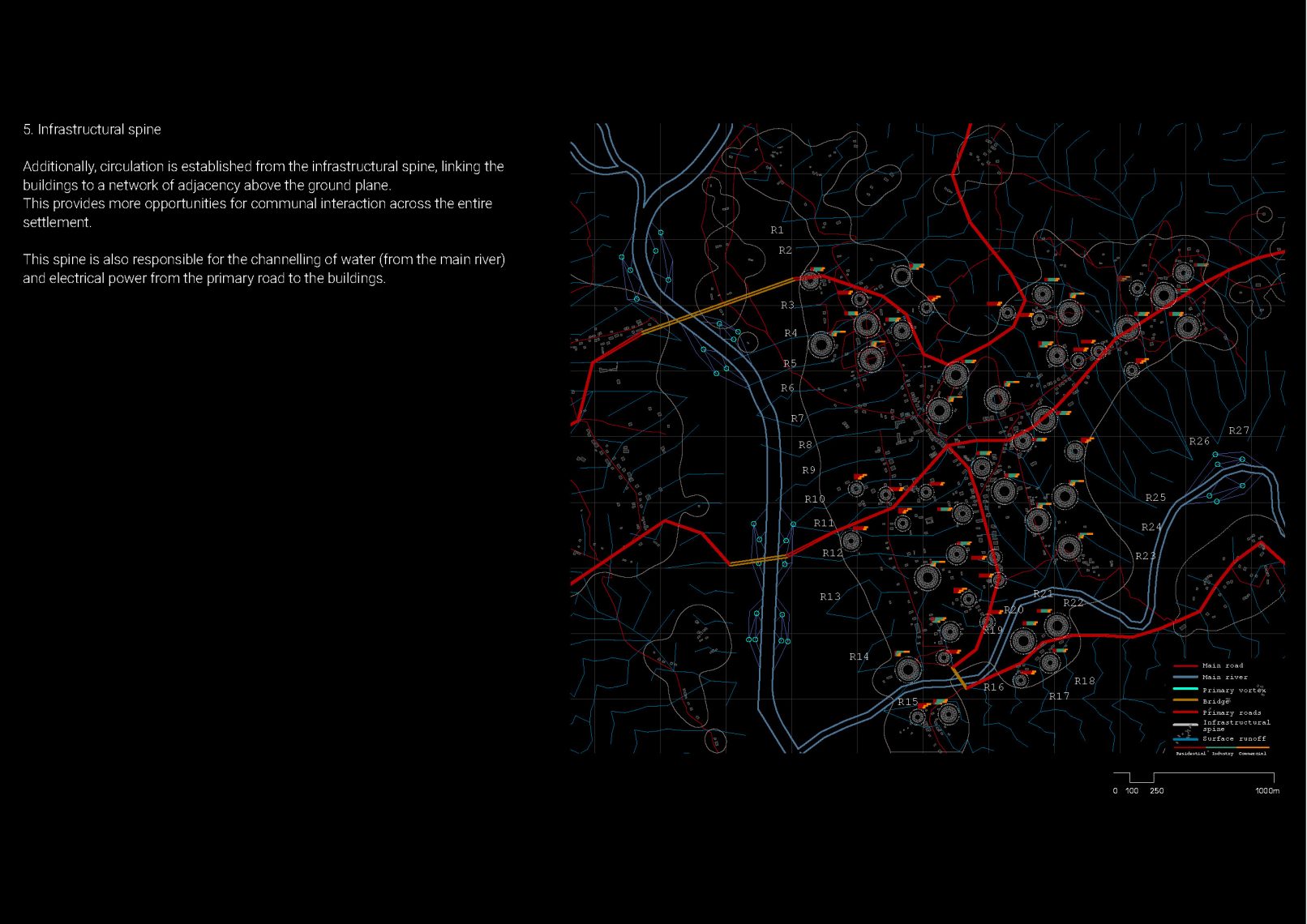 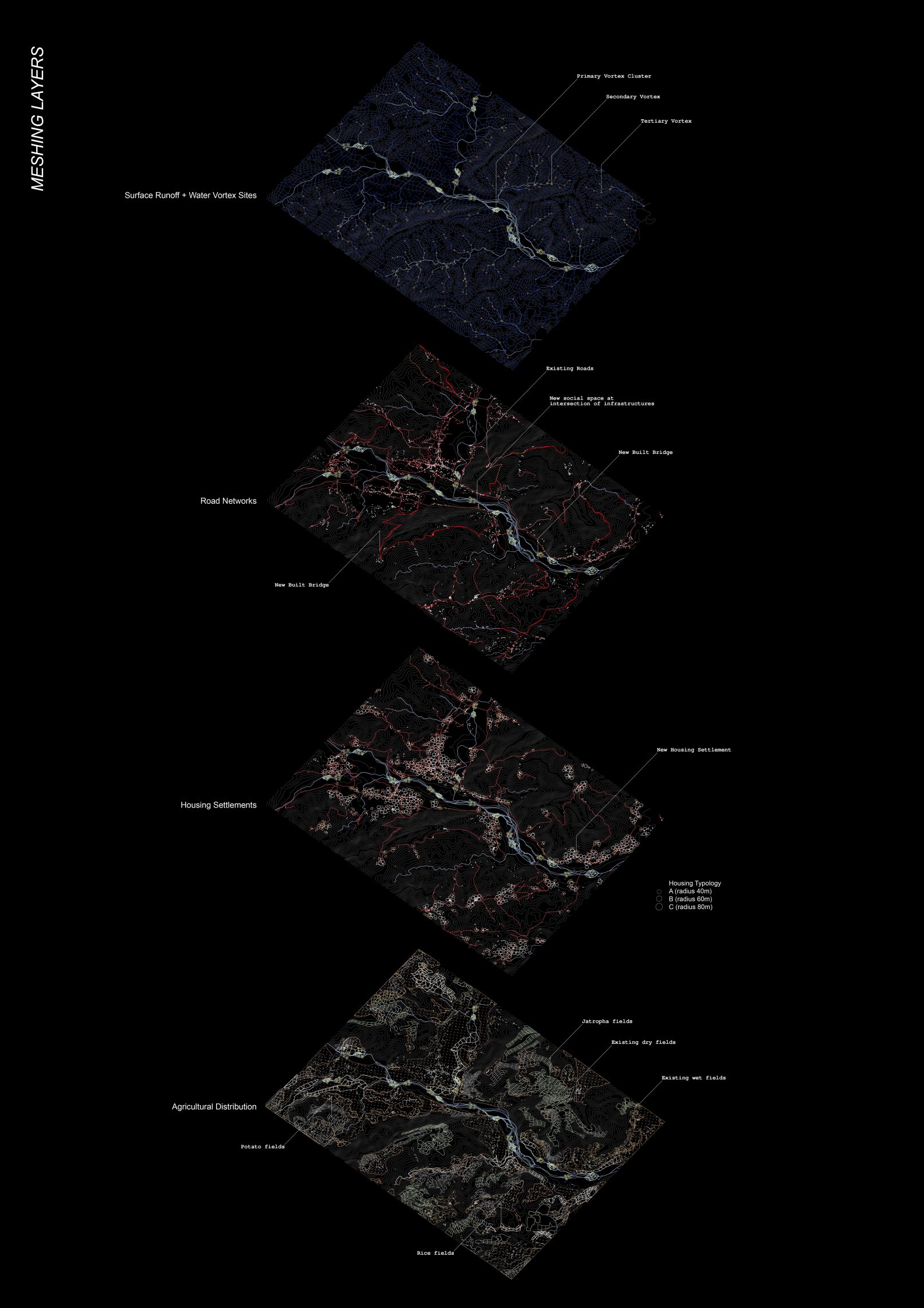 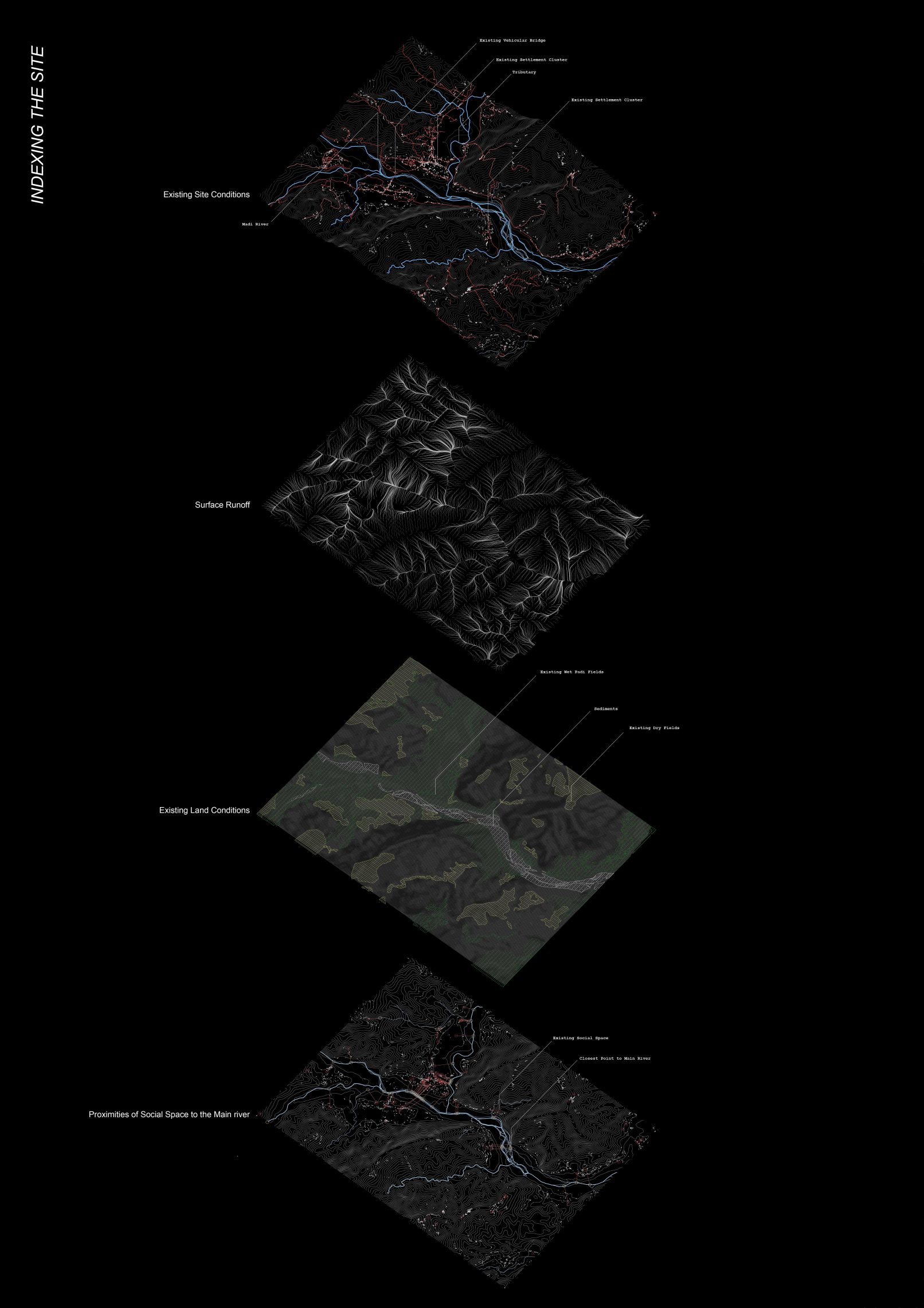